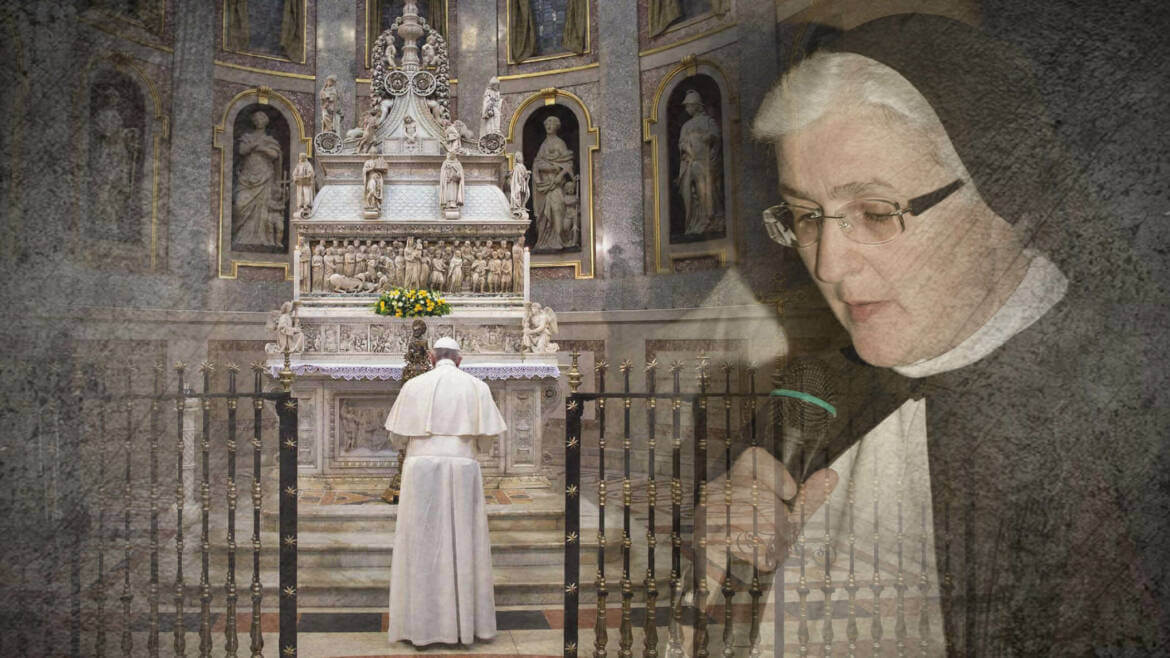 “No display of bizarre piety, simple humanity. Too simple for hagiographers and chroniclers of long-lasting knowledge”: so writes Simon Tugwell in his Homage to a Saint (in the Italian edition of G. Bedouelle, Dominic. The Grace of the Word), a prayer he addresses to St Dominic. “Simple humanity”: Dominic lived in a period of changing times and new challenges for the Church’s evangelising mission, as Pope Francis wrote in his letter to the Order, Praedicator Gratiae. We could easily say: nothing new! On the contrary, today we are living in a time of change, as the Pope himself has reminded us several times. What can Dominic’s charism say today to the women and men of our time? Certainly it is still captivating, given that his Order is very much alive! It will be discussed, and certainly there will be people much more competent and experienced than I who will be able to suggest answers to this question.

However, as a nun of the Order of Preachers, I can accept this question for my own life, not least in the light of that “female” holiness which is such a feature of our history.

It all began… with a meeting Dominic had on the journey with his Bishop Diego, organised for a diplomatic mission. Beyond the borders of Spain, in the south of France, Dominic met the Cathar heresy, or rather, he met the Cathar heretics. He listened, discussed, convinced: the light of the morning was see the conversion of the innkeeper but the conversion, too, of Dominic who in that experience grasped the urgency of a preaching renewed in style and witness, visible in a community that was to be the first apostolic community.

The first nucleus of the Order was formed by a group of women from the Cathar heresy who, accepting Dominic’s preaching and lifestyle, gathered in Prouilhe, in the south of France, and formed the first community of nuns. This is a presence that has never ceased. Women, Cathars: a “periphery”, to use a terminology so dear to Pope Francis. Through this choice, Dominic expressed his conviction that there is no one who does not deserve to be heard, and no one to whom we are not sent to proclaim the Word of life, Christ the Lord. There are countless testimonies of women who met him and were attracted by his amiability, his humanity and his joy and followed him on the path of following Christ… Forget “saint with a sad face”: the witnesses tell us that no one was more joyful than he was and, since he loved everyone, he was loved by all (men and women!) (cf. Libellus, 107).

Dominic is the saint who perhaps more than any other has shown us God’s trust in every man and woman. This can be seen concretely in the style of common life, as he wanted, which also includes our particular style of governance: we are sisters, brothers, who meet together to understand which is the path that the Lord asks us to take, whether it be towards new frontiers, or – which is more difficult! – of conversion. Together. Our Chapters are our Cross and our Grace: how often do we go into Chapter with concerns or tensions and then come out bemused by the solutions that have emerged and the joy we share!

Dominic had confidence in women, in his sisters: while he himself was responsible for the formation of the first nuns of Prouilhe, it was these French nuns who were called to transmit the charism to the nuns of Rome, without undermining the figure of the Founder in any way. Trust and respect were also shown by Dominic’s first successor, Blessed Jordan of Saxony, who asked (and was granted) that some nuns from the Roman monastery be transferred to the new foundation in Bologna to formate the women who had received the religious habit from him.

Brothers and sisters: one Order, for 800 years, the Sancta Praedicatio. A unity that is not always easy to incarnate and live, but certainly a challenge and an opportunity to be welcomed…

In the Libellus, the first biography of St Dominic written by Blessed Jordan, we read that “God gave

him the singular gift of weeping for sinners, the wretched, and the afflicted, whose sufferings he felt within his compassionate heart, which poured out its hidden feelings in a shower of tears”  (cf. Libellus, 12). In the Middle Ages, the “innermost part of the heart” was supposed to be God’s alone: yet Dominic’s heart was inhabited by Christ, whom he loved infinitely, and by all those who are in the heart of God, the poor, sinners, heretics, the distant… The nuns are called to continue to be this “womb”, this “hidden heart”, rich in compassion, in which everyone finds a place, in which no one is excluded and from which a prayer of praise and intercession rises constantly.

Still today our monasteries are this “open refuge” to which anyone can come, with the certainty of finding a heart that listens, that offers the only Word that can give hope, freedom from idols and the chains that oppress and the certainty of remembrance in prayer! The nuns are a constant reminder that preaching comes from contemplation, from the experience of God.

Along the path of these 800 years there are many lights of holiness in our monasteries. Here I would like to recall two sisters who are very dear to me and less well known than the great Catherine of Siena and Rose of Lima: Saint Catherine de’ Ricci (Prato) and the Ven. Domenica da Paradiso (Florence), who recall Saint Dominic’s “speaking with God or about God”. Both recognised as ‘spiritual mothers’, ‘preachers’, through their writings (the Epistolary of the Prato Saint is remarkable) and their meetings in the parlour, they were points of reference in the life and history of their time. They were both witnesses to an extraordinarily passionate love of the humanity of Christ, of his Word of Truth. It is this love, a gift of the Spirit, that opened their eyes and made them contemplatives: capable, like Dominic, of looking at reality and history with God’s own eyes. God’s gaze is “active charity”, like that which Dominic had asked for himself, to be truly a disciple of Christ. A charity that is rooted in the liberating, “life-giving and truth of the divine word” (cf. Pope Francis, Praedicator Gratiae).

“A barely legible signature on the parchments of history. So simple as not to hide the dew of divine light”, writes Simon Tugwell: Dominic disappears between the folds of history, a few lines and nothing more. He does not bind to himself, but always refers back to his Lord; he leaves no writings, because he is a humble servant of the Word, of the Church and of the Magisterium.

And so, with all our centuries-old history, we too, daughters and sons of Dominic: humble servants of the Word, of the Christ who saves, of every brother and sister. “Simple humanity”. Yes: Dominic, Praedicator Gratiae, is alive in his Order. It is impossible not to love him. 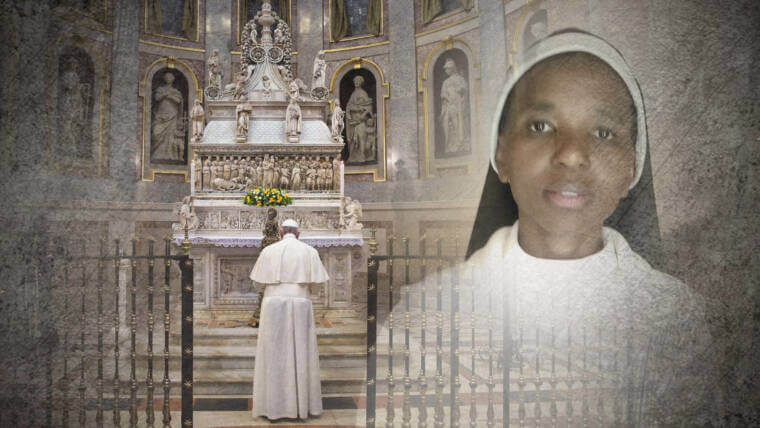 Called to Respond to the Needs of Our Age 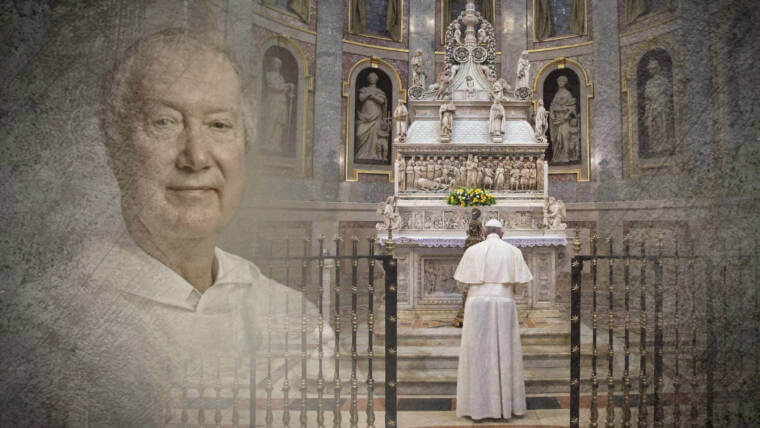 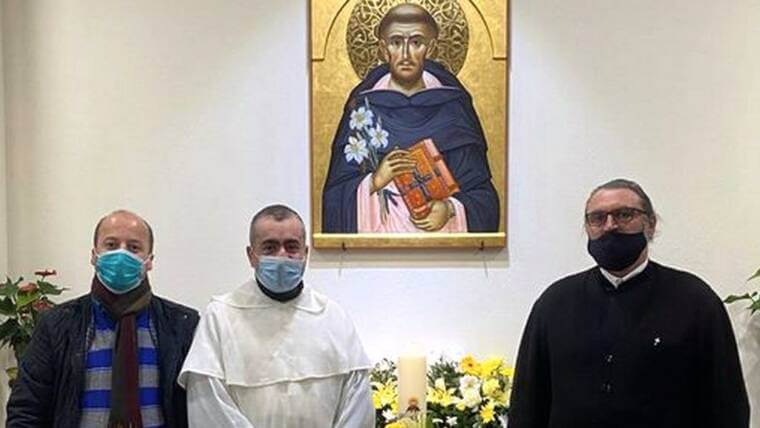 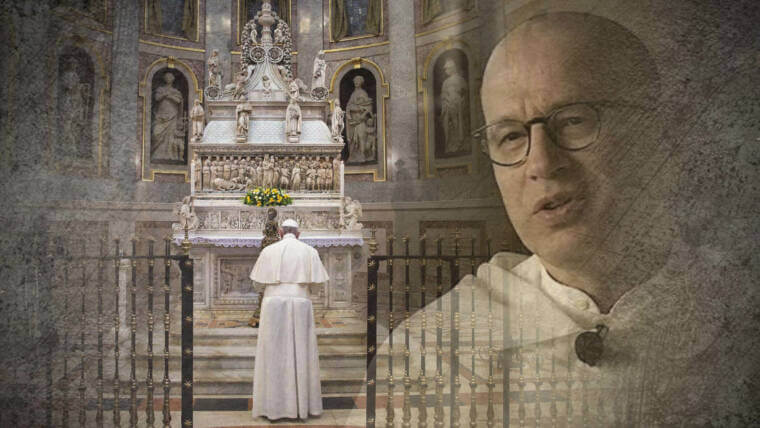